Victoria’s Secret shopping for Halloween, not for us

As experiences go, re-meeting people on our journey is not something we considered or really planned for and when it happens it’s a feeling of a sort of deeper friendship, no matter how brief the reunion.

A Miami facebook check in by sharki3, (not promoting fb at all), was followed by a message from Jean Paul (JP) who we had met in Porto Allegre, Brazil several months ago saying he was close by on vacation with his girlfriend.

Somehow, with little wifi we managed to track him down to a downtown shopping mall. Now anyone in their right mind would have made a specific place and time to meet, but we lost our wifi connection and headed there hopefully that we would locate him when we arrived.

Now when you see the picture you will realize that it was easier for us to spot this giant of a man from our vantage point than for him to see two hobbits.

Our brief reunion and chance to meet his girlfriend was definitely worth the bus ride through Miami and the wandering around Bayside Shopping Centre with our heads up in skies. JP had picked us up along with our pals Ben and Krysta in June this year in Porto Allegre and toured us around his hometown, asking for nothing in return. 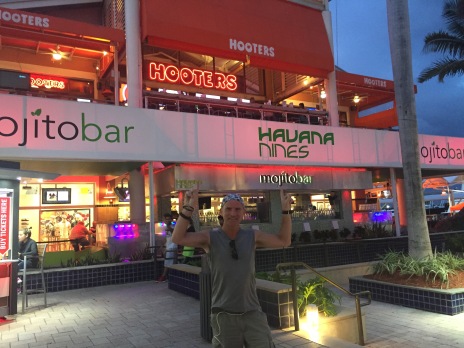 maybe some wifi in Hooters

Such a cool, friendly and helpful guy and such a small world of integrated connections and chance reunions.