This was to be our last volunteering opportunity on our travels and yet again, here at the Centre de Formation des Apprentis des 13 Vents – or CFA 13 Vents for short – was another new approach for us to get involved.

Students spend one week per month away from their workplace to learn practical skills of their jobs in a training environment, such as; baker, cook, butcher, hairdresser, hotel receptionist, server, bar person, pastry chef and other general skills.

France, being famous for its culinary delights and its culture, is underpinned with such organisations around the country, such as CFA 13 Vents and their programmes are designed as formal apprenticeships to maintain such a famous and proud cultural national heritage, with recognition for artisan competency taken very seriously with prestigious awards held nationwide. 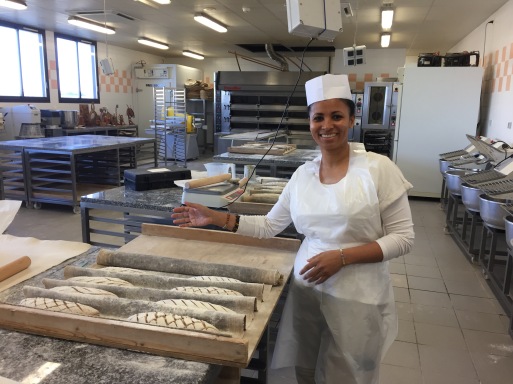 Sharki3 tries her hand at baking

Now add into this proud heritage, the arch-enemy, namely, England and anything that is English, such as; fish and chips, or my lame French attempts at words barely recognisable when I dare utter them and this makes it even more admirable and remarkable that CFA 13 Vents runs compulsory English Language for every student.

No need to ask why, but in case you are wondering, the French believe it is important to have a firm grasp of basics of another language for travelling and working abroad. Many apprentices go on to work in UK and USA for valuable work experience, which makes them even more desirable upon returning to their homeland.

Michel our host, Benjamin another volunteer and Ouided flanked by the finnies

The challenge for Michel, the Director and Ouided, the English Teacher is that the 750 students that pass through their doors annually, get about 1-2 hours of English per month before they return to class and they have exams which they must pass for their apprenticeship success.

Now that is a tough ask in any language.