Rainforest trekking and a tasty insect for lunch

Preston, Marisa, Natalia and us

Taking a short hike through the jungle on a farm proved to be a much bigger adventure than any of us thought or certainly intended. 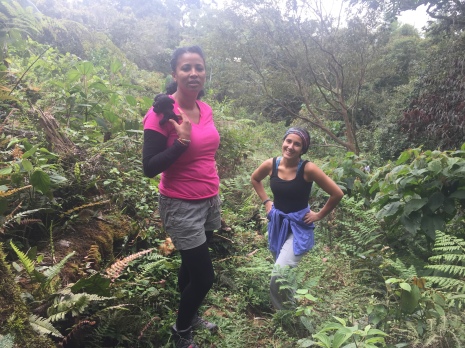 We had gone away for the weekend with Natalia & Mauro, our hosts, Marisa & Preston, our co-volunteers and  Mauro’s mum and dad, to stay on their family farm in an off road place near Kilometro 18, about 18 km from Cali I figured, don’t ask. On Sunday we were joined by Ana & Felipe, we had already met at the English Club, so off we trekked, like intrepid explorers.

huge insects to eat along the journey

Getting back to my story, we headed off through the coffee plantation in Mauro’s dads back garden, via the lemon trees, it’s that kind of place, armed with a machete and a spade, we clambered across or under or just through barbed wire fencing to reach this beautiful waterfall.

the only way is up

This wasn’t enough for some, as Natalia, headed onwards and upwards across the waterfall face and tree lined cliff edges, slipping and sliding all the way until she disappeared in front of me, hmm whilst the crew below me had whittled down to just Sharki3, Marisa and Preston, no one else to be seen, nor could we hear them and this was one of those climbs that you realise you can only go upwards because the route down just does not make sense. It was the small or was it large chasms that you build up the courage to fling yourself across going up, but it just does not seem possible going down. So, up it was! 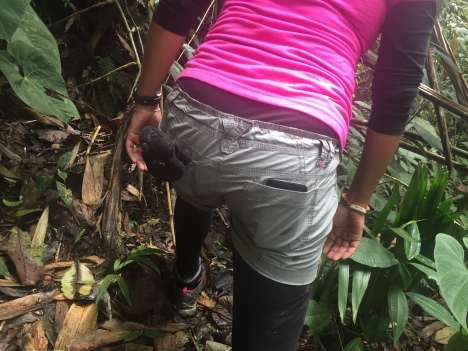 BlackDawg nearly lost his way on his outing

reunited back at the farm

Finally, at the top and locating the intrepid Natalia, we decided to head up the hill towards the road that we knew was definitely somewhere. It only became a bit more serious and less amusing as we reached the top of the hill and saw how far we had climbed and that we were on private property. Now whether people had guns or not, did enter our heads, but we laughed it off and put Natalia at the front, well she speaks Spanish, and does not look like a Gringo. Two deserted mansion-like properties later, we found the gated road, and ushered ourselves into a bit of safety, marching for an hour back to the farm. The pace picking up slightly as Natalia decided that this was a good moment to share stories of mass kidnappings by rebels, well we were all aware of this stuff, but thanks for reminding us Natalia, I think she just wanted us to speed up our walking.

where is Natalia going, time for a pose though

Trekking through this terrain we had the privilege of seeing the beauty of nature in all its glory, from farmlands, to mountains, waterfalls, insects and birds to beautiful trees.