Just when we thought our lecturing days were over 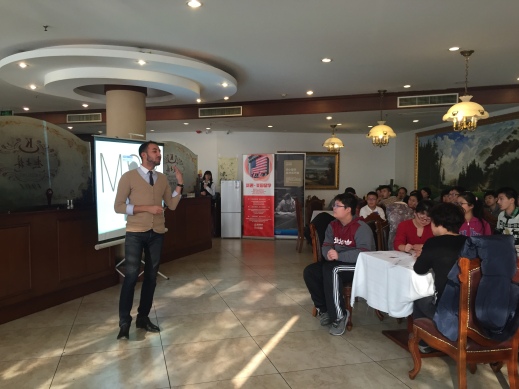 We stayed in Tianjin with our friend Micheal, who we met whilst we were volunteering in Tanzania. He is a masters student and lecturer at Nankai University, and also completing his PhD at the same time at a different university. Don’t ask its a long and incredible story and he is definitely one of a kind, presenting at TED in Beijing next week.

Micheal invited us to present our thinking on careers and travel to students at an event he was presenting, so it was one of those night before powerpoint presentations with 6 or 7 slides. What great fun following on from Micheal and doing a duet with Sharki3 and our mini slide deck for this group of 50 or so students and their parents. Sometimes controversial in our own country, well I think we struck some home runs with their thinking. 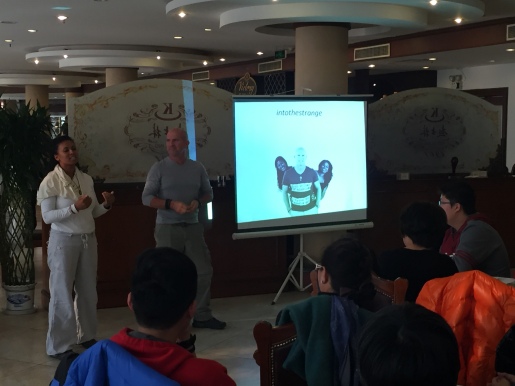 Next up Micheal wanted us to join him in class at Nankai University so we planned to meet him at the main gate to the university one day so he could take us through to sit in on one of his classes on International Relations and Political Science.

Right on cue, our phones would not connect this day and Micheal was late to collect us! So either we wait around in the freezing cold or head back to our apartment or……option three…….try and locate him in this huge 10000 student strong campus!

Not one’s for passing up a challenge, we decided on the latter and set-off translating, diagrams and campus layouts with our phone apps, stopping students and asking for help until we finally reached the Nankai University Communications Department, where a helpful English speaking lady actually tracked Micheal down to a classroom in a block not too far away! Success! Well not quite….

The building was not labelled but we did find it by its shape and position in the grounds, as the excitement grew we headed to 4th floor room 419 only to find Chinese students and no Micheal. We tried every room in the corridor and wow, would you believe it the last room we found him much to his disbelief.

He had given up hope and thought we had ducked out and could not understand how us two mere mortals had located him, when we did not even know the subject he was taking. It only took us 2 hours shaking in the cold.

Next up, we were invited to participate in the debate that the students were presenting on the Chinese social system, the impacts of Maoism, the current political system and various changes since 1949. I had been reading some of Micheals text books that week, so we got stuck in on an enthralling debate, ended up presenting our backgrounds, our thoughts and views and experiences of China from an outsiders perspective. It was like being a student then a professor then a student again. Open invite from both professors to return anytime and such rich learnings about the history of China gained by ourselves.

Ahh to be in class as a student again! I guess our classroom is the world in which we are traveling through and that is pretty awesome! Lucky us!