I heard about the discovery of the Terracotta Army when I was a boy watching Blue Peter Children’s Programme and thought it fascinating, but actually going to see these warriors up close and personal was truly special.

Emperor Quin, who was a real bad guy, but unified China many centuries ago, had this army built to protect him in the afterworld. There are some 6000 that have been discovered but only 2000 unearthed as their colours are fragile to atmosphere, no solution to this yet. The 2000 we saw were amazing, stood there in perfect alignment, infantry, cavalry, archers and generals, ready for action.

A Chinese farmer digging for water found a well and this led to a local student writing an article about some findings which archeologists then read about. So the story was lost for 2000 years mainly due to Emperor Quin’s ruthlessness with the slaves he used and had killed who built his mausoleum closeby, so strange and unique for a country that prides itself on meticulous record keeping.

If you ever go to see this underground army, its about 45 minutes bus ride from the Xian city centre and a short walk around the complex, probably start with Pit 3 then Pit 2 and finally Pit 1 the largest last, you won’t be disappointed. 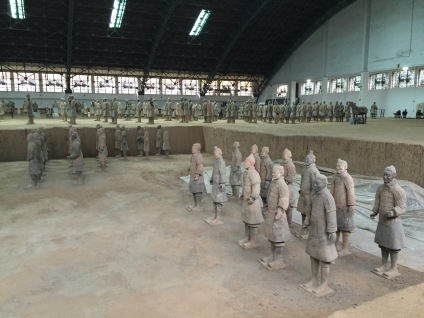