Taking the bus ride from Quito to La Mitad del Mundo, otherwise known as the Middle of the World, or the Equator, we stood at some remote bus stop in the torrential rain waiting for the correct bus and hoping our Spanish would be enough to get us there. Much faith in our abilities and some 1.5 hours and two buses later, we finally arrived at La Mitad del Mundo and headed passed the commercial Equator entrance to the small and quaint Intinan Museo, right next door, about 400 metres down the rainswept road. 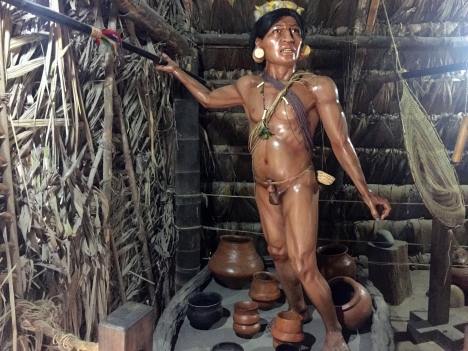 practical device for a few people I know

We had no idea of what to expect in actually being so close to the Equator, as is human practical, and wondering if it’s all just some touristy hype. Wrong again, faith intact in good people, we were greeted and toured around this outdoor museum by Cesar our fabulous Ecuadorian guide. Unable to visit deep into the Amazon on this particular journey, he explained in great depth about Amazon tribal life, of some of the various ethnic tribes, such as; the Shuar tribe who used to shrink the heads of prestigious leaders in their community and the odd enemy. Nowadays, they are limited to shrinking the heads of animals, but just maybe Mr Trump is up for donating his least valuable asset, well I did read he needs a headshrink somewhere. Then there is the Wuaorani tribe, who tie up their tackle so not to catch their crown jewels in the fearsome spears and huge dart guns they carry in the jungle. Ouch! 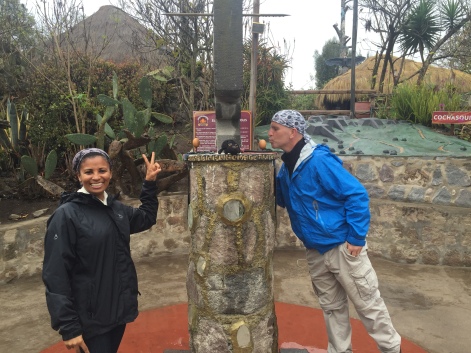 what is black dawg doing there…?

For those of you in the northern hemisphere, do you know which direction waters flows out of a basin? And, for those of you in the southern hemisphere do you know? Have a look next time and in laymans terms it just follows the direction that the earth is spinning when you position yourself in either hemisphere. So yes, we checked it out and low and behold when on the equator the water only flows straight, with no pull of either pole. Embarking in similar silly experiments, such as; balancing an egg on a nail, to see if the poles pulled the yoke one way or another, only to discover it balances perfectly and in our final experiment, we tested our ability to walk along the line closest to the actual GPS calculated middle of the Earth, and strangely enough one pole pulls you and you lose balance. All I can say is I have walked better when drunk, sharki3 pulled south and myself pulled north, quite eerie.

the real north side divide in perfection

brings a new meaning to the phrase “half and half”