Keeping cool when all around is conspiring to irritate 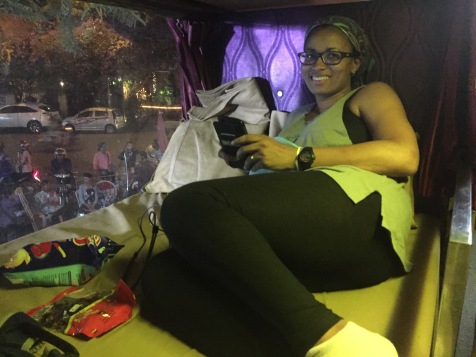 all smiles now, if only she knew

Taking the overnight bus from Phnom Penh to Bangkok a mere 12 hour ride, seemed like a fairly easy journey compared to what we have undergone so far. $25 was just top end of our budget for the relative comfort of a sleeper VIP bus. Turning up at the bus station we were somewhat surprised with the condition of the bus. It was held together by the last few rivets, and the sleeper bed was definitely the right size for our Asian cousins, once again thankful that we are below average height folk. Not at all like the photo we were shown but rolling our sleeves up, getting a good position for the trip we were ok.

A mere 10 minutes after setting off we broke down, the breakdown was soon fixed and we were on our way again. Throughout the night our bus stopped a total of six times for repairs and each time I could hear the klank klank as the driver and co-driver attempted their repairs in the darkness of the night. It was on the fifth occasion  that I ventured outside and watched them in the dark with cell phone torch guiding their actions on what I think was the air accumulator unit for the rear brakes, techno talk for those in the know and in layman’s terms I mean that the brakes do not work. I smiled anxiously as they carved a branch from a nearby tree and hit it into the bottom of the air accumulator with the end of a spanner. Seemingly happy with themselves they partially tightened nuts and it was time to be on our way.

Next up the air con stopped working, just to rub in some salt, so it was a case of grin and bear it now with noises coming from the back of the bus of metal to metal grinding and beads of sweat pouring down our faces. Finally, we arrived at Siem Reap some 4 hours later than planned to pick up other passengers, shame for them it was 4:00am. It may have been a good idea for the driver to have told the office at this stage about his problems as we still had a long way to the border, he was far too wise for being honest and on the outskirts of town we broke down for the sixth and final time. No communications just the driver sat on the pavement playing candy crush, not very well, but enjoying himself. I eventually got him to answer my small question “what the hell is happening” or words to that effect, calmly he explained in his broken English that he was waiting on the office and all was ok. Keeping calm is an art when you are tired, fed up, in the dark, quite literally in the dark and have to get to Bangkok for a flight. Yep it was the one time that we had a flight booked ahead to save some time on Skarki3’s visa and our weary bodies and we estimated a six hour gap between bus and flight would be plenty in Bangkok to connect. How wrong we we were! 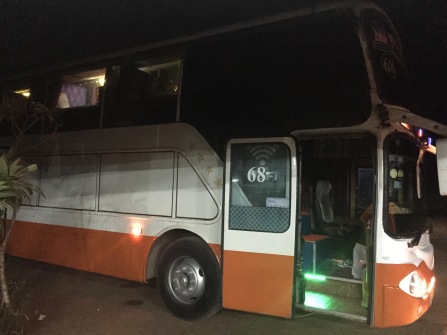 The replacement bus arrived and we all reloaded our luggage and off we set to Poi Pet at the Cambodia – Thai border. Now we were in early morning traffic and the congested immigration centre conspired to slow us down, we were now at the border some six hours later than we thought.

Moving through the border to be greeted by our bus company on the Thai side telling us where to go and not responding to our concerns about the delays and actions of their driver. We were escorted through to the bus company office and the fun really began.

We explained the situation and demanded to know what they were going to do while the manager looked at his phone messages not daring to look us in the eye, his first words being “are done now?” hohum deep breaths and an even calmer head was needed after all who were we to complain, we should be thankful we had got this far.

He burst into life shouting at us and banging his fist on the table in his office, then as Sharki3 was taking a photo he struck out at her hands demanding the camera. Now my left arm is not so strong and I had my small backpack on my front but knocking him back as he strode towards Sharki3, with his friend pushing at me my only thought was to make sure he did not get there cos I think I would have had to bail Sharki3 out if she had gotten hold of him.

Part of their scam is to make you wait again and although there are other buses there you must pay extra to get on the one that is there now otherwise wait another hour. Yes a complete joke!

So he continued to shout at us and we went to get the Thai Police with him egging us on, as soon as we were outside he changed and wanted us on the bus that was going now, so coaxing us on and us looking at the time wondering if this would be a missed flight, we knew we had to swallow the pride pill and just get on.

Their website and Facebook page received some nice posts and photos of their atrocious service and response to our complaint.

Now on the minivan bus to Bangkok we struck up a conversation with a single traveller, Jordi from Barcelona and made a wonderful friend who loved our actions, he could hear everything, so arriving in Bangkok much too late for our flight, no change possible because we bought the cheap economy ticket, the three of us made our way to the airport and we jumped on the next available flight to Phuket, arriving three hours later than originally planned….beach time here we come! 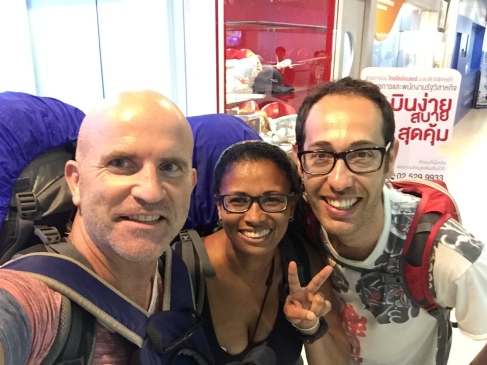 Morale of the story……keep your cell phone well charged, because you don’t know when the torch and candy crush will come in handy.