Taking a taxi into Nairobi city centre took us from the slum area where we are staying, through some amazing sites of Kenyan entrepreneurship with street vendors scattered across the landscape. As we passed by the Moi Air Force base I saw a soldier see me and he immediately flagged our taxi down.

We had not seen another Mzongu (white man) all week, so……I wonder why the soldier selected our taxi. As he strode up to our car with his shiny AK-47 firmly grasped in his hands, he demanded our window to be opened and the driver to show his ID before immediately demanding our passports. How he knew we were foreign and had passports I can only guess 🙂

Looking at sharki3 I thought for a second about being difficult for this guy, but elected for the safer, polite option and begrudgingly gave him our passports. Throughout his painstakingly slow examination of our passports, I kept my mouth tightly shut until he handed sharki3 her passport back followed by mine.

He then proceeded to tell us off for not knowing the rules of Kenya that we had broken…acting dumb now and very innocent we acknowledged we did not know the rules he was referring to, so he then picked on the driver and gave him a hard time for not informing us….

Would we be walking through the slums without a taxi? Would we get detained in a Kenyan cell? Would he let us go?….eventually after his strong words he told us to go.

Then the taxi driver informed us that the soldier was trying to get a bribe out of us and wanted us to be awkward so he would have just cause to detain us.

We finally found out that we must wear seat belts in the back seat of a car, taxi and on every bus!

The crazy drivers of buses and taxis continued zooming passed us with carefree abandon for things as trivial as speed limits or indicators or driving on the correct side of the road. Well done to this particularly vigilant soldier. You did a good job detaining us!

For obvious reasons no action photos for this post 🙂 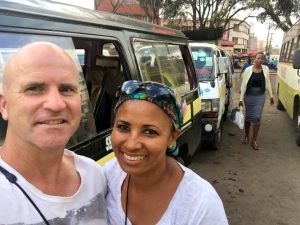